If your screwdriver doesn’t want to function the way it should because of a battery malfunction, don’t hurry to buy another one. We’ll teach you how to restore battery screwdriver and make it last longer.

Restore Your Battery Screwdriver at Home and Save Money

A removable battery screwdriver is an expensive tool. Its battery allows using a screwdriver without the need to access to electrical outlets. That is why a significant number of people try to repair it and make it last longer on their own. How do you improve its functioning? How do you troubleshoot and fix the malfunctioning battery screwdriver? We’ll answer these questions in the article. 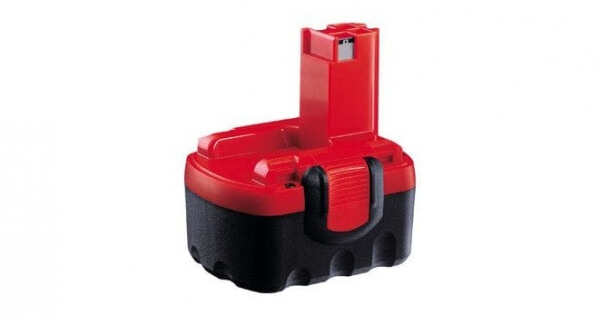 Battery Screwdriver: the Lifetime and Ways of Its Replacement

The lifetime of a battery depends on its type, storage conditions and frequency of its use. The more you use the screwdriver, the faster the battery will drain. Each battery also tends self-discharge even if the person doesn’t use the instrument. For example, a Ni-Cd battery can lose up to 4% of its capacity per month. As a rule, the battery loses its capacity because of sulphation (if you sectionalize such a battery its units will be covered with yellow-white powder). 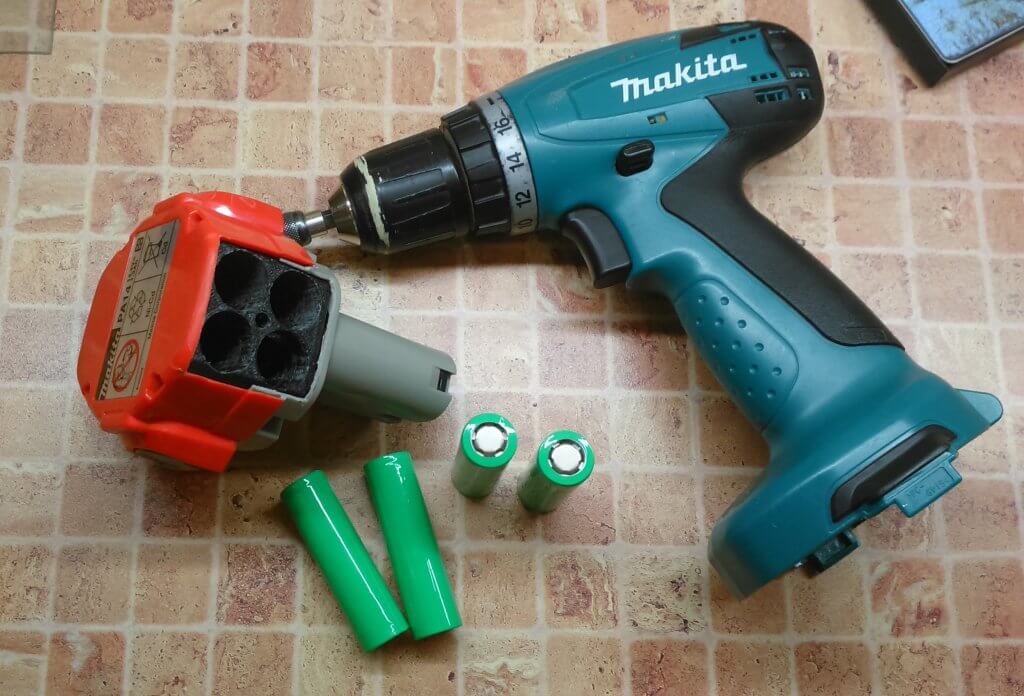 Experts recommend buying a screwdriver with an additional battery. Battery life doesn’t usually exceed five years. Any battery can be replaced to make the screwdriver serve longer. You can also order batteries with a higher capacity which will expand the working hours of the implement.

One should know the battery type, the reason for its malfunction and possible ways to fix it.

Types of Cordless Drill Battery and the Main Distinction of Each

Each screwdriver includes several batteries connected in one chain regarding a specific sequence. Each part of the gathering has a standard size and voltage, but they vary in capacity which is indicated on the cell and measured in A/h.

People often prefer the first type that’s why it is a best-seller. The voltage of each unit is 1.2 volts, and the capacity reaches 12000mAh (in case we work with a 12-volt instrument).

They can be restored because they possess the so-called “memory effect” which lets them reverse the lost capacity. Lithium batteries, on the contrary, do not have such a feature because Lithium tends to decompose over time. Ni-Cd batteries won’t get spoiled because of low temperature and retain their characteristics being in a discharged state. There are several cons. The battery has a small capacity, tends to self-discharge, is toxic and doesn’t exist long in case of intensive use.

Ni-Mh batteries are non-toxic, have low “memory effect” capacity, their self-discharge tendency is rather low, but their capacity is higher than that of Ni-Cd. Due to that, they serve longer even if used intensively. Their disadvantages are the following: dearness; it loses some characteristics being in a discharged state and doesn’t stand low temperatures. 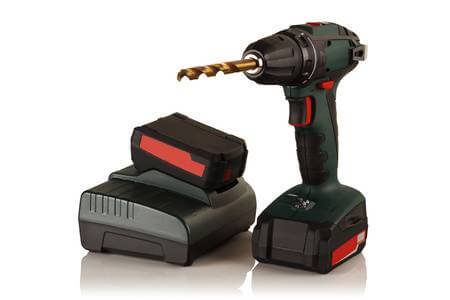 Li-Ion batteries possess the high capacity, don’t tend to self-discharge, serve longer due to a high number of charge/discharge cycles. The battery is smaller compared to the previous two types.

If you want to repair the battery, you should troubleshoot first. There are two best ways to do that.

Use a multimeter instrument

Switch on the multimeter to the DCV voltage metering mode. The rated voltages for different battery types have different values: Ni-Cd and Ni-Mh have 1.2V, and Li-Ion has 3.6V. First, set the battery to full charge. Then, disassemble the body of the battery and measure each “can” (unit) using the instrument. Mark the units which voltage differs much from the norm. Then bring the battery together to install it in the screwdriver. Soon after you should unload the battery to a noticeable decrease in power for which a number of operations can be performed with the help of a power tool. After the discharging process, the battery case is reassembled again. Measure all units once again and pay attention to the marked units. In case a voltage of the cell sections has a lower indication (up to 0.7V) such a battery won’t function properly and will be unsuitable.

The technology for detecting weak batteries resembles the previous one. The difference is in the method of battery discharging. Here you should use 12-V (for example, 40W) bulb to do that. In addition, you’ll not have to assemble and disassemble the battery pack several times.

The construction of a screwdriver doesn’t depend on its brand. All of them are identical and look like this one in the picture below. 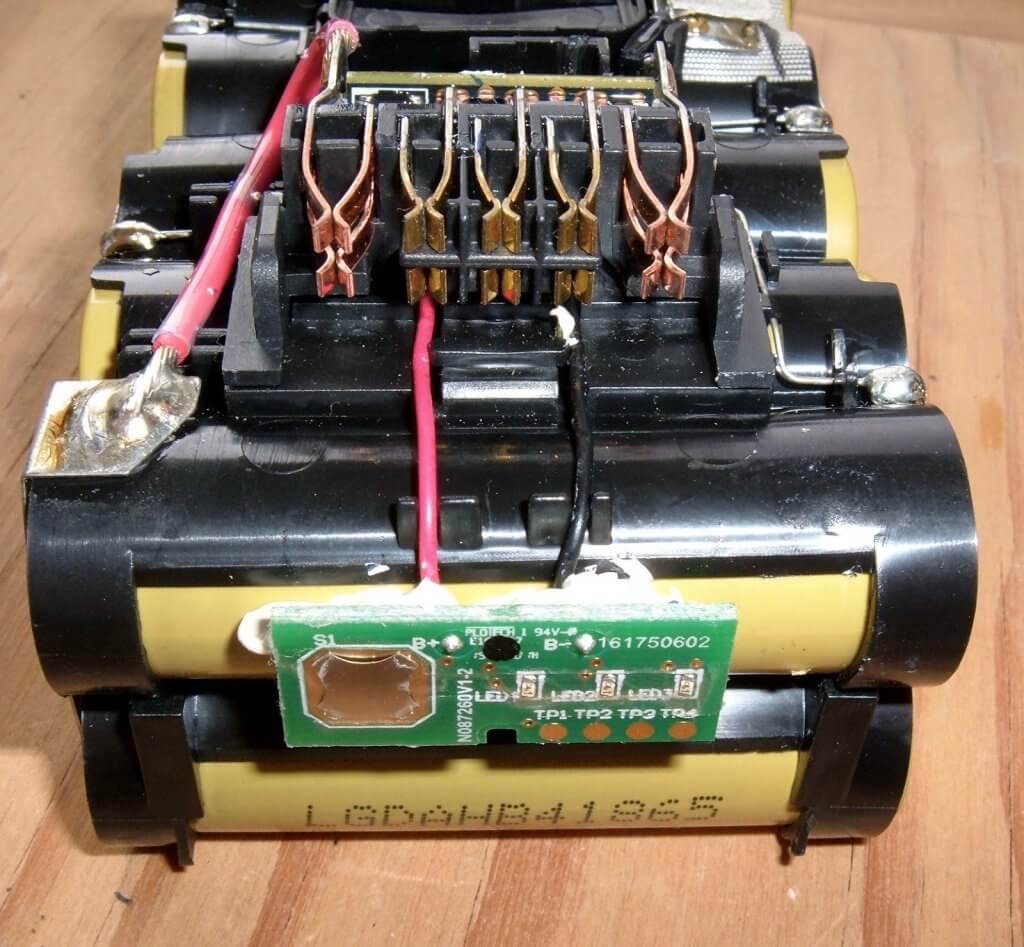 If we disassemble it, we’ll see that there are elements which are connected sequentially. Each battery cell has a standard size and voltage but a different capacity (it regards the battery type). To open the body of the battery one should unscrew it and separate the parts of the body.

The most effective method of battery repair is to replace worn out cans with new elements. You should acquire the required positions, taking into account the technical and dimensional characteristics of the donors (should be identical).

The replacement of failed components does not cause much difficulty and involves the use of a soldering iron and materials for soldering (tin and alcohol flux on rosin). It is desirable to use existing plates or to use copper conductors with an appropriate cross-section (associated with high charging currents). To prevent overheating of the cans, soldering should be done quickly. The battery wiring diagram must be consistent, and therefore the minus of each previous battery must be connected with the plus of the next one.

The final part of the work should be the potential equalization of all components that make up the battery. It is necessary to make a cycle of full discharge and charge of the battery, and after its cooling down, you should repeat the indicated actions at least twice.

NB! Li-Ion batteries cannot be recovered. You can only find weak elements and substitute them. Before you start recovering the battery, check whether the charging device works properly or not. It often happens that the problem is in charging device malfunction. 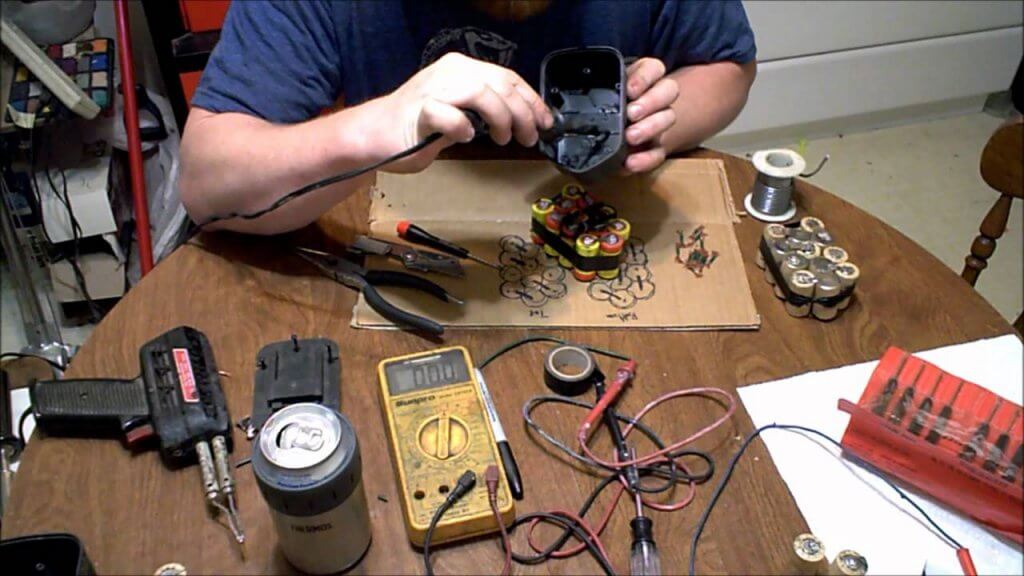 You can restore only the packs of Ni-Cd battery. There are three effective ways to do that.

The electrolyte can boil in case of a forced charge, and soon it runs out. It must be replaced to prolong the battery work. So, after determining the failed cans, cut the connecting plates and dismantle the required elements. After that, using a thin punch (with a diameter of no more than 1 mm), make a hole in the can body (on the minus side) through which it is necessary to add 0.5 to 1 cubic centimeter of distilled water to the inside of the element (after pumping out a similar amount of air). The final part of the restoration work will be sealing the can (epoxy can be used) and connecting the element to the existing circuit.

To equalize the potential of all the constituent elements (using 1.5 V light bulbs), all battery banks should be discharged. Then they should go through 5-6 full charge/discharge cycles, and only after that, you should use a power tool.

Elimination of the memory effect

Charge the battery to full if possible using low current. After that, discharge the battery by applying a small load and thus providing a slow (soft) discharge. Use an ordinary bulb (220V/60W) and unload the device to 30% of the nominal capacity (up to 5V). Repeat the procedure at least five times before you decide to start using the battery again. This method can give you one bonus year of work.

“The memory effect” is the result of improper battery charging and discharging. Due to that, the battery “doesn’t understand” how charged or discharged it is.
Replacing the damaged electrolyte (it is done with the help of donor battery cells)
Find the units which weaken the battery and replace them. Don’t change the construction and try to use native plates.

We have already described the process of the repair of different screwdriver battery types. Now we are going to present the most popular screwdriver brands. When purchasing a screwdriver, you should pay attention to its battery type. It’s written in the manual instruction and is also indicated on the bottom of the screwdriver or its side (on the battery).

Here we can see that the screwdriver has a Ni-Cd battery. So, you should look through the information as mentioned earlier to see how this battery can be restored.

The below-presented screwdriver Interskol works on Nickel-cadmium battery. You can either replace the spoiled Interskol screwdriver battery or try to restore it with the help of “memory effect” elimination or compression.

Makita screwdriver functions due to the Li-Ion battery (14.4W). Makita battery screwdriver cannot be fixed in case you don’t have the analog elements of the battery which need replacement.

Bosch screwdriver functions due to Ni-Cd battery. If the Bosch screwdriver replacement battery functions improperly, then you are to find out the weak battery cells and either replace them or to mark for further fixing (compression, elimination of “memory effect”).

To improve Hitachi battery screwdriver (shown below), you should first open the housing. It is a very simple procedure. Just unscrew the screws around the perimeter and disconnect the case. Hitachi has a Ni-Cd battery which can be restored with the help of damaged electrolyte replacing, compaction and elimination of the “memory effect.”

This screwdriver type functions due to Li-Ion battery. That’s why its repair is impossible. If the charging device doesn’t have defects, then you can either buy a new AEG battery or replace its defected elements.

Craftsman screwdriver brand is equipped with a Ni-Cd battery that can be restored like any other Ni-Cd battery (see the information given above).

PS. Almost all of the brands as mentioned above can have another battery type which depends on the model and a manufacturer. For instance, Craftsman screwdriver can have all three battery types. The screwdrivers are presented in various models, and their price varies regarding, first of all, Craftsman drill battery type.

If you want your screwdriver battery to serve longer, you should know the basic rules of its use. 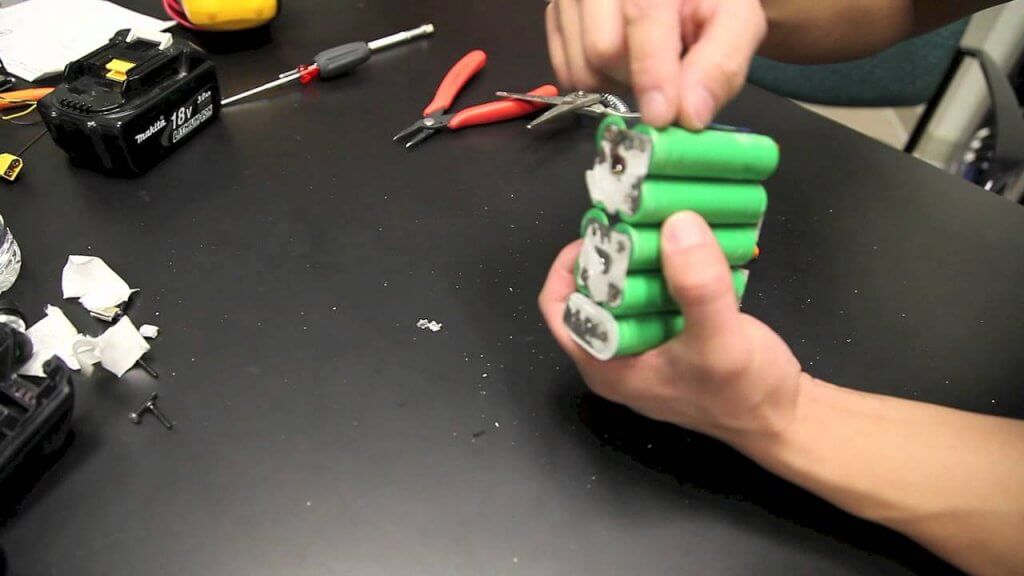 If you find that the battery of your screwdriver has exhausted its entire working life, it is better not to get ready to buy a new device. You may try to restore its working capacity. Many ways allow you to assess the chances of a successful repair, after which you can begin to implement the plan. In some situations, this approach allows you to save a lot of money and continue to perform the necessary operations on the same day.

How to recover Li-Ion battery: a few available tips